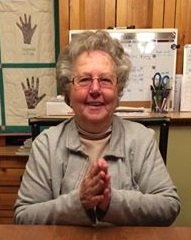 Obituary of Eleanor B. Medany

Eleanor Bayruns Medany of Deptford, NJ passed away on October 26 at the age of 96.

Legacy
Eleanor " Babe" Bayruns Medany was born and raised in Camden, NJ.  In 1943, she married the love of her life, the late Smyne Medany who was her devoted husband for 62 years. Together, in 1951, they built their home in Deptford, where they raised their family and gave back to their community for more than six decades.

She was known for her love of sports, especially softball, and was incredibly good at it. So good in fact that Eleanor earned the nickname “Babe,” after the great Babe Ruth - an endearing nickname her husband used throughout their marriage. Eleanor also enjoyed watching football and baseball and was an avid Phillies and Eagles fan.

Eleanor was witty, intelligent and a voracious reader.  Eleanor loved to play Scrabble.  She also enjoyed going to the casinos with her three sisters Elsie, Elizabeth (Honey) and Marie. She was a devout Catholic and founding member (along with her husband Smyne) of the Most Holy Redeemer Catholic Church in Westville Grove where they were active in church functions and fundraisers.

Family
The oldest daughter of 12 and last surviving child to the late Thomas and Helen Bayruns,  Eleanor is survived by her beloved children Theodora "Teddie" (Keith) Reichenbach, Paul and (Joan) Medany, Marie (Guy) Lynam, and Jane (Donnie) Edgar. Cherished grandmother of Guy, Jaclyn, Krystine, Patrick, Christopher and Zachary and great-grandmother to 12 great-grandchildren.  Eleanor is also survived by many loving nieces and nephews.

We want to give special thanks to Ashley Rose, Eleanor’s loyal and dedicated caregiver for the last five years, whom she thought of as her fourth daughter.

Farewell tribute
Funeral Services for Eleanor will be held privately.
In Eleanor's honor, memorial contributions may be made to the Alzheimer’s Association at act.alz.org/site/Donation

To send flowers to the family or plant a tree in memory of Eleanor Medany, please visit Tribute Store

Share Your Memory of
Eleanor
Upload Your Memory View All Memories
Be the first to upload a memory!
Share A Memory
Send Flowers