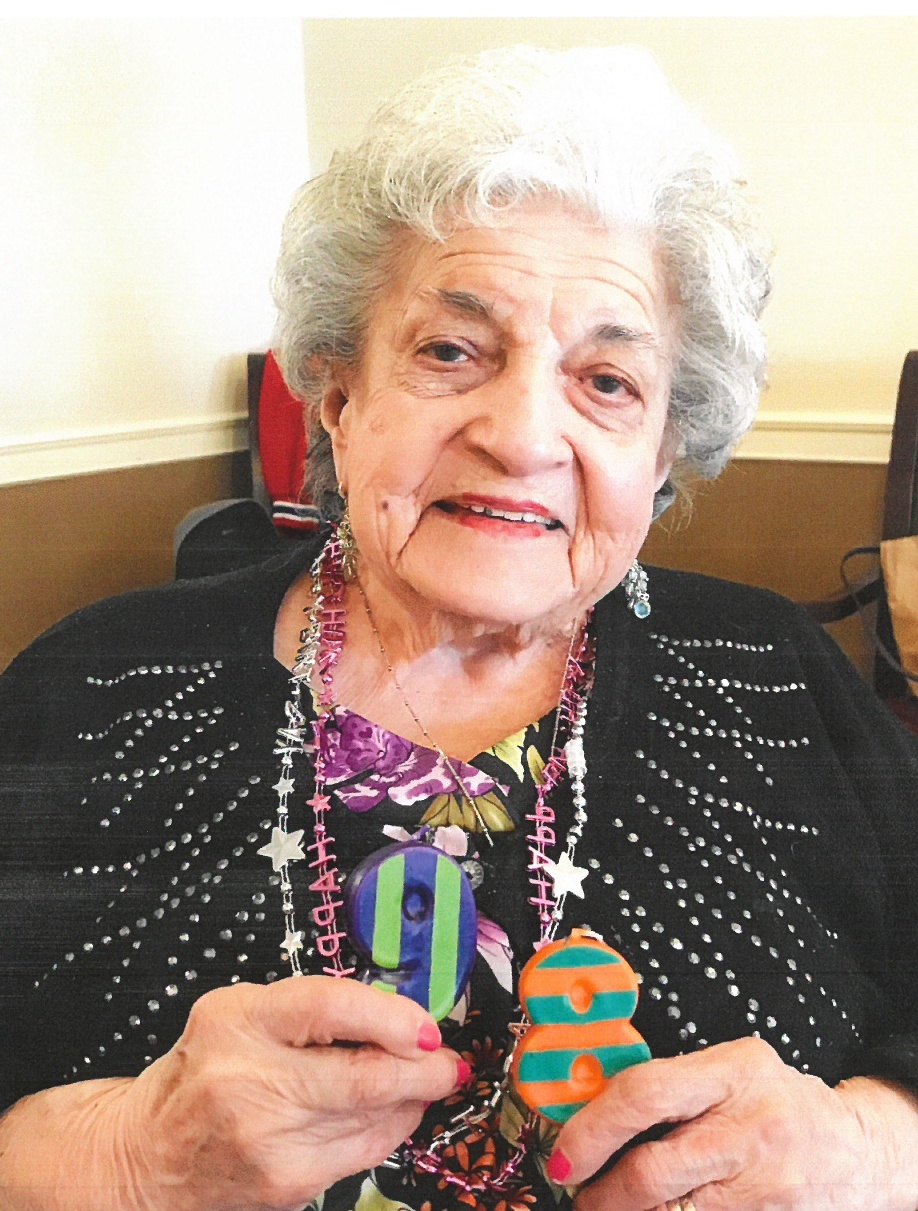 Obituary of Flavia (DiCroce) Litrenta passed away May 2, 2020.

At age 98, Flavia lived a simple but rich life. Married for nearly 68 years, she was a devoted wife to her beloved husband Pasquale, who passed away in 2010.

Flavia was born in South Philadelphia the oldest of five children. She dedicated herself to caring for her family, always cooking and baking, doing chores and maintaining the home. She was one of a kind and had her own way of doing things. She was always ready to go and always the first to be done. That was Flavia’s way, “I don’t monkey around,” she would say while never complaining. She was a doting grandmother and spoiled her grandchildren. Her grandchildren were her royalty and she gave them everything that she could if it was hers to give. Flavia’s great grandchildren also gave her great joy as well. She loved their lively visits and enjoyed hearing their stories and attended all of their celebrations.

In her final years Flavia lived fully at Washington Township Senior Living. She remained active and engaged taking part in the seasonal functions and parties. Flavia loved music, arts and crafts, and crocheted blankets for charity and was an excellent bingo player. She was well cared for by the dedicated aides and staff members at the facility.

Flavia was a force. Most of the time she seemed to be invincible. During her lifetime she overcame difficult injuries and illnesses but remained tough and unyielding. It took a global pandemic to slow her down but she stayed strong until the end.

Due to the National Health Crisis; Funeral Services for Flavia will be held privately for her immediate family.

In lieu of flowers, memorial contributions may be made in Flavia's memory to Disabled American Veterans at DAV.org/donate

Today, we honor and celebrate Flavia DiCroce Litrenta. At a​ge 98, Flavia ​lived a simple but rich life. Married for nearly 68 years, she was a devoted wife to her beloved husband Pat, who passed in 2010. Flavia was a proud mother of two smart and accomplished children, Nancy and Larry; and a loving grandmother and great grandmother to very special kids whom she adored.

In her eyes, Flavia's kids could do no wrong. We were the very best! That was often the theme of many of Flavia's notable quips like, "Nobody beats my kids." If we faced rejection, she would echo my grandfather. "If they don't like you," she'd say, "they're the losers."

Flavia's words were often in our ears as kids. We'd laugh about her funny mottos. A favorite of course was when she'd say, "I don't monkey around." No, certainly not. Flavia didn't monkey around. She was steadfast in her beliefs and resolute in her actions. She had a keen memory and took a solid stance in her facts, her faith and her family. She was so very proud of her heritage, proud to be Italian and proud to be from South Philly.

As a child, the oldest of five, Flavia cared dutifully for her siblings and for her ailing mother. As a young lady, she was a hard worker, first as a seamstress for a clothing company and later in a factory, rolling and packing cigars. She worked the night shift and without a car, she had to ride the trolley at all hours. She went to great lengths and sacrificed much to get her family what they needed, good quality clothes and shoes for her children, yarn for her crocheting, even new strings for her husband's violin.

As a wife, Flavia dedicated herself to caring for her family, always cooking and baking, doing chores and maintaining the house. But she was one of a kind and had her own way. She tackled her tasks earlier than most. So many times I asked Grandmom what time she got up. "Oh.." she'd say, "2:30...3." Flavia started her day in the middle of the night! She was always ready to go and always the first to be done. That was Flavia's way. She didn't monkey around.

Another favorite phrase is her infamous response when you asked her how she was doing. Flavia didn’t beat around the bush. You'd ask, "Gram, how are you today?" She'd say, "What's the use in complaining? No one wants to hear you!" Always telling it like it is -- that was Flavia’s way. She didn’t monkey around.

Flavia was a doting grandmother. She spoiled her grandkids in every way that she could. No, she didn’t have much money, but she indulged us. She sparked our imagination, our senses and our appetites. Let me tell you how:

On steamy summer nights in my grandparents’ tiny row-house on 7th street, my clammy skin stuck to the plastic-covered couch as a frozen Klondike ice cream bar dripped down my wrist. Grandmom and I watched Wheel of Fortune at night. She solved the puzzles quicker than the contestants, shouting out the phrases well before Vanna White finished flipping those consonants and vowels. When the Phillies were playing in town, we'd hear the fireworks go off at Vet stadium after a homerun, the booms just audible over the rumbling of the trucks tearing down the street. The vibrating hum of the window AC unit lulled me to sleep as I spread out on the lumpy sofa-bed in the living room.

Flavia was the ideal babysitter and playmate. She played countless card games like rummy and war, hide-and-seek, and board games like Aggravation and Sorry. She always let me win. We watched cartoons and shows together; Sesame Street, Mr. Rogers and Casper the Friendly Ghost, but she didn’t like Woody Woodpecker. She said he was too fresh. We played dress up in her closet. She looped beads around my neck, wrapped sparkly shawls around my shoulders and slipped silky gloves on my hands. I destroyed most of it. I spilled baby powder on her carpet and I broke her bed, jumping on it like a trampoline. I sloshed soapy water on her black-and-white, tiled bathroom floor, and sprayed her floral perfume throughout the bedroom. She cleaned it all up and never told. She was my partner in crime. We used to play store. I would set up all of the knick-knacks around the living room and she'd pretend to be the customer. She'd ask how much each item was and paid me in pennies and nickels. We played for hours.

And, of course, when Grandmom cooked, I ate. We all ate, so much so that some of us had to be put on diets when we returned home from our stay with her. Her kitchen was my heaven. Donned in her hand-sewn house dresses, she fried meatballs in cast iron and simmered gravy all day. On special mornings, she squeezed fresh oranges into juice and dusted buttery slices of French toast with powdered sugar. She served Grandpop prunes. I used to feel so badly that Grandpop had to eat those prunes, always 4 of them, always in the same bowl. She served me raviolis for breakfast. She baked cupcakes from scratch...in fact, she’d say she could smell cake made from a boxed mix a mile away. And she could whip up a meal in no time, with just about anything. Her secret to making food delicious…salt… a lot of salt! And, again, I spilled just about everything on her kitchen floor; sticky pancake syrup, sickeningly sweet iced tea; thick whole milk and crimson-colored cranberry juice. She cleaned it all up and never told. She took me out to lunch sometimes. We'd walk a few blocks to Kmart. They had a cafeteria then and we would order the turkey platter that came with a scoop of clumpy mashed potatoes and gloopy, brown gravy. We'd even get a donut at the Dunkin' Donuts next to Pathmark. That was always such a treat.

She often reminisced about her time with us.  She'd say she had the blues when she thought of her time caring for us. She proclaimed those times were her very best times. Certainly, Flavia's great-grandchildren also gave her great joy as well. She loved their lively visits and enjoyed hearing their stories, seeing their photos and watching their videos. She made it to their baptisms, communions and birthday parties, dressed to impress and handing out envelopes with cash tucked inside.

In her final years, Flavia lived fully at Washington Township Senior Living. She was well cared for by dedicated aides and staff members. Our family acknowledges and thanks all of them for their service and efforts. While there, Flavia remained active and engaged. She played bingo and kept track of her winning streak as her competitive spirit never wavered. “No one gets the best of me,” she’d say.

She attended happy hour, wine and cheese time, sing-a-longs, and soirees. As a wife, she proudly took a seat in the audience to watch her husband's glee club performances. But in her final years, she herself took center stage, singing in a Veterans Day show and seasonal concerts. She even gave a New Year’s Eve toast and led a sing-along. The oldest in the group and certainly the spunkiest, she sang loud and proud. She loved music and she knew every lyric and melody to so many forgotten songs from so very long ago.  She enjoyed arts and crafts, crocheted blankets for charity, was featured in the center’s newsletters, and always looked forward to themed celebrations. She especially enjoyed when the string band performed at South Philly Night and when her family attended the Valentine’s Day party. Halloween was a highlight as children in costumes paraded down the hallways of the center. Grandmom proudly showed off her kids too while handing out candy from her door.

And, oh...let’s take a moment to talk about her door...the best decorated door! She took such pride in her festive wreaths and door decor. For every holiday and every season, the decorations went up well in advance and were taken down before the holiday was even over! That was Flavia’s way. She didn’t monkey around!

Flavia was happiest whenever her kids were with her -- we all took our turns -- for daily drop ins, monthly check ups, when it was time for her signature perm, for holiday meals, to celebrate birthdays and even at the very end when we were permitted only a brief drive by. She was so happy to see her family; the last time I saw her, she smiled and waved.

Flavia was a force. Most times, she seemed invincible. She overcame insurmountable injuries, severe illness and significant setbacks in her lifetime. She remained tough and unyielding. It took a global pandemic to slow down Flavia. And yet she still put up a fight. She wouldn't give up and certainly didn't give in easily. She battled hard and stayed strong until the very end, until the work was done. And only then did she let go; only then did she allow herself to finally rest.

She was helped along the way of course, by her wonderful caretakers and her dedicated children. Loyal son Larry and his wife Mary, and dutiful daughter Nancy and her husband Jack…together, they ensured that my grandparents were always well cared for, comfortable and able to enjoy their lives to the fullest. We thank them for their tireless devotion and astounding effort. “My kids need to stick together when I’m gone,” she’d say. “We will,” we say. So, let's remember my grandmother, Flavia. Together, let's honor her life, her legacy and her memory. And in her way, let's be sure not to monkey around.

Share Your Memory of
Flavia
Upload Your Memory View All Memories
Be the first to upload a memory!