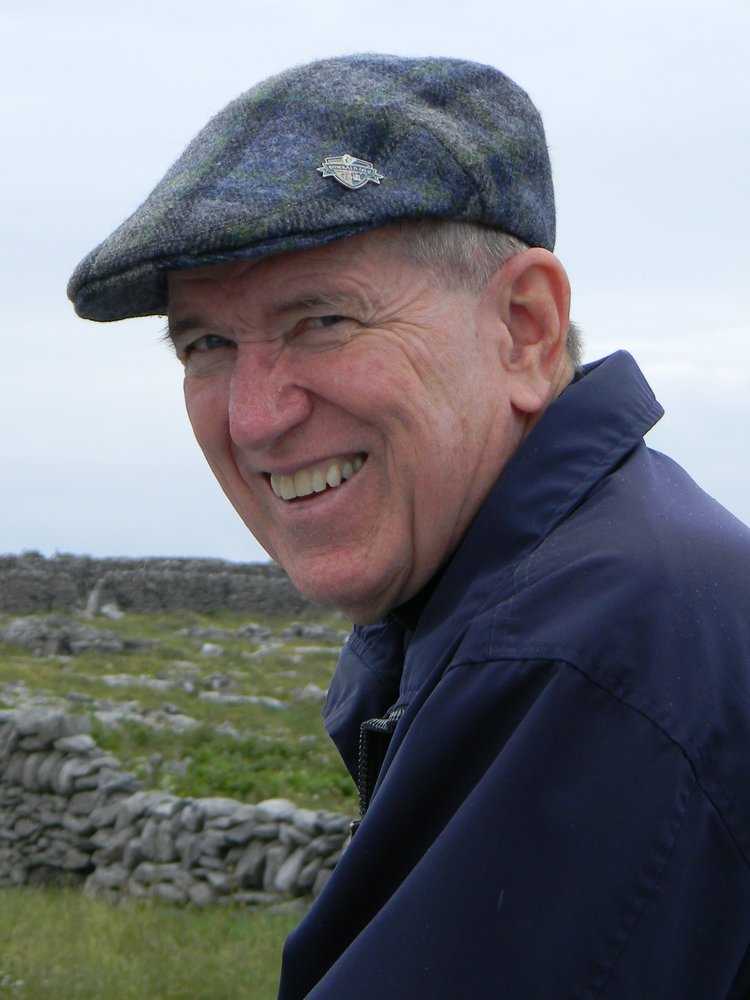 John Campbell, 74, of Mullica Hill, NJ (formerly of Drexel Hill, PA) passed away on November 26, 2019 at home, surrounded by his loving family after a courageous battle with cancer.
John was born to the late James and Agnes (Deal) Campbell.  As one of 8 children, John learned to be kind, compassionate, competitive and generous.  These traits were the backbone of John’s character and endeared him to everyone he encountered. In his youth, growing up in South Philadelphia, John enjoyed summers in Margate, NJ and developed a spiritual bond with the ocean, beach and with his cousins, that would stay with him throughout his life. John graduated from Bishop Neumann High School where he was active in track and cross county.  Afterwards, he enlisted in the United States Navy where he proudly served.  When he returned to Philadelphia, true to his South Philly roots, he marched with the Mummers, just like all his older brothers. John embarked on a career at the American College of Physicians and retired as a Director, after over 40 years of service.  While there, he also pursued his lifelong love of learning by attending the University of Pennsylvania. John was a sportsman who enjoyed competition of all kinds; he became an avid Notre Dame fan at his childhood home, the highlight of that was his trip to see Notre Dame vs. Navy in Dublin with his extended family.  Always a fan of Philadelphia teams, John loved the Flyers from their early days and was lucky enough to ride on the front of the bus with the team part of the way down Broad Street during their Stanley Cup Parade. The sport that he enjoyed the most was every team that his children or grandchildren played on. John believed passionately in helping those in need and was always willing to share his time and talents.  He was an active volunteer in the community and lent his efforts to many organizations.  John was steadfast in his devotion to the MS Society and helped raise significant money for the organization as a participant in their Challenge Walks.  Since retirement, John and his wife traveled both near and far.  He also became an active member of the Ancient Order of Hibernians – Commodore Barry Division; the gift of great friends was an added bonus to their good works.  John was a tireless worker, who was humble in his accomplishments and admired by many.  He was most proud of his family and his relationships.  He is survived by his devoted and beloved wife of 41 years, Colleen (Patterson) and children Beth Simpson (Temple, TX) Patricia (Steve) Hessenauer  (Logan Twp., NJ)  Christopher (Mary) of Havertown, PA, Chuck (Joanna) of Palm Harbor, FL and John (Tammy).  His grandchildren were some of his greatest joys; McKinley White (Dallas, TX) Joshua White (Tabernash, CO) Melissa Hessenauer (Conshohocken, PA), Steven (Alexa Piccoli) (Conshohocken, PA), Emily Hessenauer (Logan Twp, NJ), Brendan Campbell, Chip Campbell, Nora Campbell (Havertown, PA), Madeleine Campbell   (Oldsmar, FL, Grace Campbell (West Chester, PA), Colleen Campbell, Gabe Campbell (Palm Harbor, FL).
The siblings who gave him so many memories include, Peter (Betty), Jim (Rosemary), Cassie (Sister James Agnes, SSJ),William (Bill), Agnes (the late Robert) Salamone, Patrick (Joan) and Michael (Carol).  John was pre-deceased by his three Grand-Angels, and two dear sisters-in-law, Helen (Harkins) Campbell and Faith (Garrish) Campbell.
He was the much loved son-in-law of Harry & Barbara Patterson (Cape May, NJ) and their family; Maureen (George) Beebe, Barbara (the late Jim) Foster, Patricia (the late Shawn) Buchanan, Kate (John) Walsh, Harry Patterson, John Patterson and Martin (Debbie) Patterson.  Numerous nephews, nieces, cousins and dear friends all held a special place in his heart and brought joy and laughter to his life.
John was fortunate to have a medical team that was kind and caring, specifically: Dr. Swisher-McClure, Erin McMenamin, PhD, CRNP, in addition to Dr. Charu Aggarwal and the lovely Faith Mutale, CRNP at the Abramson Cancer Center at Penn Medicine. He was also gifted with his knowledgeable and trusted Primary Physician, Kyong Bin Park of Jefferson Health.

Farewell Tribute
Relatives and friends are invited to attend his viewing on Wednesday, December 4th from 4:00PM to 8:00PM in the McGuinness Funeral Home - Washington Township, 573 Egg Harbor Road, Sewell, NJ and Thursday, December 5th from 10:15AM to 11:15AM  in SAINT CLARE ASSISI PARISH-ST. MICHAEL'S CHURCH, 313 MEMORIAL AVE. GIBBSTOWN, NJ. Funeral Mass at 11:30AM.  Interment will be private by the request of the family.  In lieu of flowers memorial contributions may be made to Sisters of St. Joseph, Office of Development, 9701 Germantown Ave., Philadelphia, PA 19118-2694ssjspringfield.org. or Bonner/prendie Crew Association, P.O. Box 72, Drexel Hill, PA 19026- mbapcrew.com or National Multiple Sclerosis Society - www.nationalmssociety.org.
share the memories … share love … ShareLife® at www.mcgfuneral.com

To send flowers to the family or plant a tree in memory of John Campbell, please visit Tribute Store
Wednesday
4
December