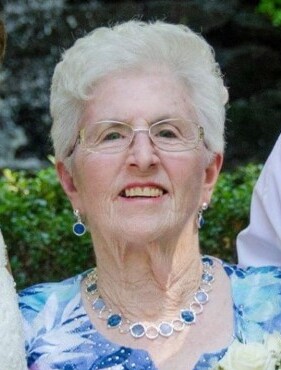 Lois M. Phelps (nee Biggs) age 87 went home to be with the Lord surrounded by loved ones on Sunday, January 8th. She joins her husband, Michael (2006), and daughters Lois (2016) and Marguerite (2018). Lois was born in Millville, NJ, and lived in many South Jersey towns before her marriage to Michael Phelps of National Park, NJ. She resided in National Park for 54 years, lived with Armond & Rebecca Viola in Pitman, NJ for four years and lived one year with Michael & Judy Phelps in Glassboro, NJ.

Lois attended Glassboro High School and graduated in Manchester, KY. She worked as a bank teller until her children were born. In later years, she worked in Woodbury, NJ as a bank teller and switchboard operator for the National Bank & Trust Company of Gloucester County.

Mike was a customer at the bank where mom worked when they met. You should ask Michael or Rebecca for the story about "five to eight" Mike. They met in August of 1962, and after a long courtship of two and a half months, they were married October 26, 1962. Lois was 27 when they were married. Mike was a longtime bachelor, but after many ladies tried, Lois won his heart when he was 35.

Lois loved her family and spent most of her time raising them. She loved the Phillies and many kinds of music, especially religious, patriotic and country gospel. She was very patriotic and loved decorating her home for the holidays. She liked to crochet and cross stitch. She cared for her grandchildren and great grandchildren tremendously. They would always inspire her biggest and most joyful smiles. Her truest joy was always being with her family.

She loved having family vacations. Her husband, Mike, did most of the driving, but Lois did all of the planning and navigation. When the kids were young they vacationed in the Poconos, Disney World, Williamsburg, Niagara Falls, and Brigantine, NJ. As the kids became adults, family vacations continued together to Myrtle Beach, the Outer Banks, Georgia and more trips to Brigantine. In their later years, Lois and Mike took two adventurous trips across the United States in Mike's red pickup truck, once taking a middle of the country route to California, and once taking a northerly route to Montana. They also made one memorable trip to Hawaii for their 25th wedding anniversary.

Lois was a practical woman, but could easily cry at parades and for anything patriotic. She cared for her husband at home for six and half years after his stroke in 1999. In 2006, when Mike passed away, she continued to live in National Park in their same home and was independent and lived alone for many years. In her later years, she showed an enormous amount of grace, patience and dignity, growing older and rising above the trials that came her way. She rarely complained, but kept trying to increase her strength and maintain her health until the end. She never gave in or gave up, even though she had been ready to go home for a while, to leave her body and to be present with the Lord and those she loved who had passed on before her.

Lois never considered herself sweet, but everybody who cared for her invariably loved her, was touched by her and said she was such a sweet lady. She will be missed by everyone that knew her, cared for her and loved her.

Family and friends are invited to attend her viewing on Thursday, January 19th from 6:00PM to 8:00PM and Friday, January 20th from 9:00AM to 10:00AM in the McGuinness Funeral Home-(Woodbury Location), 34 Hunter Street Woodbury, NJ 08096.  Funeral Service at 10:00AM.  Interment to follow in Gloucester County Veterans Memorial Cemetery Williamstown, NJ.  In lieu of flowers, the family requests donations to the National M.S. Society, the Lupus Foundation of America or the American Cancer Society.

To send flowers to the family or plant a tree in memory of Lois Phelps, please visit Tribute Store
Thursday
19
January

Share Your Memory of
Lois
Upload Your Memory View All Memories
Be the first to upload a memory!
Share A Memory
Send Flowers