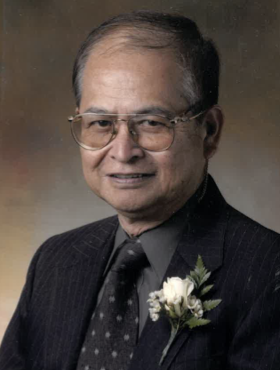 He received his degree in business from Far Eastern University in Manila. He Became a Certified Public Accountant in 1969.

In 1962, Mr. Sazon went to Laos to Join Operation Brotherhood, a humanitarian group of medical, agricultural and business professionals, as well as social workers, nutritionists, and engineers providing assistance to Vietnam and Laos during the Vietnam War. It was there where he met his future spouse, Corazon Sazon( nee Portugal), Critical Care Registered Nurse. They were married in Laotian Capital City of Vientiane on May 7, 1966. The elder of their two sons, Antonio Jr. was born in June of the following year.

It would not be long before the Sazon family would begin calling the Philadelphia-South Jersey region home and Mr. Sazon would embark on his career in financial planning at Children’s Hospital of Philadelphia. In December of 1972, younger son Richard was born.

Following his retirement from Children’s Hospital in 2002, Mr. Sazon elected to reconnect with his passion for bowling, a pastime he avidly pursued during his tenure with Operation Brotherhood. For a time he held concurrent memberships in three Senior Bowling Leagues. When he wasn’t at the lanes, he would catch PBA tournaments on tv over lunch or dinner. To Hone his technique, Mr. Sazon was known to review online footage of his favorite PBA Hall-of-Famers, including the late Earl Anthony as well as Walter Ray Williams and Parker Bohn III.

Other interest of his included walks in the park, bike riding, and watching returns of Columbo. While he knew many of the episodes practically by heart, he never tired of watching them, especially the episodes Starring Patrick McGoohan and Jack Cassidy.

After 56 years of marriage and nearly 20 years of retirement, Antonio went home to his lord and savior on June 9, 2022. In addition to his wife and two sons, he is survived by five of his seven siblings as well as many extended family members and longtime friends.

To send flowers to the family or plant a tree in memory of Antonio Sazon, please visit Tribute Store

Share Your Memory of
Antonio
Upload Your Memory View All Memories
Be the first to upload a memory!
Share A Memory
Send Flowers