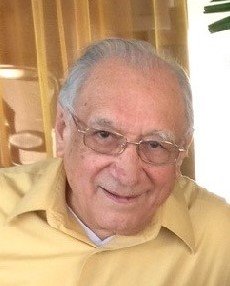 On Thursday January 7, 2021, the world lost a loving and devoted husband, father, grandfather and uncle.  Pedro Antonio Moran was called home to be in the glory of the Kingdom of the Lord at the age of 87.

Pedro was born in Ricaurte, Narino, Colombia, S.A. on August 6, 1933 to father Pedro Moran and mother Julia Moran Moreano. Pedro was taught at an early age an incomparable work ethic.  Gifted with intelligence and motivation, he left home at the age of 14 years to pursue and achieve many academic and professional goals.  While in Colombia he attended medical school and was an officer of narcotics law enforcement.

He met his wife to be, Eucaris Ospino, in her town of Baranquilla, Colombia where he pursued her with confidence that he had found true love.  The unceasing romantic, he left all behind to follow her to the United States where she came to work in order to support her family.  Pedro gained employment in various factories including the position of foreman at the Bulova Watch Company. While there, he also attended technical schools to advance his skills and and further his potential. When he knew that he had fruitful opportunities, he sought out and married Eucaris on December 30, 1961/ the one and only true love of his life. His work ethic and desire to take care of his family led him to fulfilling the American Dream as a sole proprietor of a dry cleaning business in Brooklyn, NY in 1968.

Together with his wife, they managed their business for over 25 years to secure the education of all his children.  Pedro could not remain a retired man.  He later became the recording studio manager for his son and managed the financial and operational activities of the business.  His charming, outgoing, and charismatic personality was an extraordinary draw to many of the prominent entertainment artists that came to record their music.

If you asked anyone that crossed Pedro’s path, who he was, the common threads would be a man of great faith and devotion to his family along with a signature style level of charm, wit and obsessions with baseball – including his beloved Mets team. With all of the accolades in academics and profession, his greatest achievement, he would tell you is his family.  He loved and cherished his wife, children, grandchildren, nephews and nieces and those close to him that he considered his family.  Each person could tell a story of a way that Pedro has impacted their life – he was a hero to all of us.  As a true “Force Of Nature”, his roles went from being the “classroom mom” for his grandchildren to being the ever present Dad of wisdom to impart advice or just a listening ear, he was a man devoted to God and who placed all his Faith in the Lord to lead him and show him the way.  His tireless love and devotion to his family were evident even in his final moments.

Family and friends are invited to a visitation at McGuinness Funeral Home, 573 Egg Harbor Road, Sewell, NJ on Wednesday, January 20, 2021 from 9:30 am to 11:00 am. A Mass of Christian Burial will be celebrated at Our Lady of Peace Parish at St. Mary's Church, Williamstown, NJ at 12:00 pm.  Interment will follow in All Saint's Cemetery, Newfield, NJ.

To live stream the visitation at McGuinness Funeral Home from 9:30 to 11:00 am please use the following link: https://client.tribucast.com/tcid/515921939

To view the funeral Mass on Wednesday, January 20th at 12pm you can go to the Our Lady of Peace Parish Facebook Page:

Go to that link and then please keep refreshing the page in your web-browser a few minutes before the live-stream that is suppose to go live at 12pm. The video will appear when it’s live.

To send flowers to the family or plant a tree in memory of Pedro Moran, please visit Tribute Store
Wednesday
20
January

Share Your Memory of
Pedro
Upload Your Memory View All Memories
Be the first to upload a memory!
Share A Memory
Send Flowers