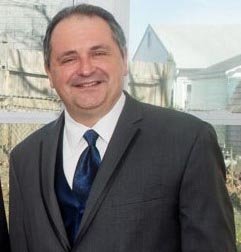 John Thomas Byrne III, Swedesboro, New Jersey passed away unexpectedly in his sleep on November 9th, 2020. He was 57.

Legacy
Born November 17th, 1962 in Woodbury, New Jersey, he was a lifelong resident of New Jersey.  John graduated from Gateway High School and earned a Bachelor's Degree in Communications from Glassboro State College. He worked in advertising after college and eventually earned the opportunity to work at a chemical plant in Pedricktown, NJ. He did what was best for his family and went out of his comfort zone by taking the job at that plant now known as Oxy Vinyls, where he worked relentlessly for over 30 years.

John often referred to himself as the walking encyclopedia of useless knowledge. He was also known to be an incredible cook, and was especially known for his chili, ribs and spinach dip. He was a lifelong Philadelphia sports fan who loved all four major sports, but especially loved the Eagles. One of his wishes was to see the Eagles win the Super Bowl before he died. That wish came true in 2017. John was an incredibly talented artist who loved to draw and had an even deeper passion for painting. He traveled the country, taking pictures and meeting the locals. He would talk to anyone who would listen and he was never wrong.

Family
Survived by his mother, Ella, devoted father to John IV (Anna) of Sicklerville, NJ, Meghan Daus (Erik) of Louisville, KY, and Timothy (Madeline) of Barrington, NJ; loyal brother to Kathleen Collins (John) Mary Narimatsu (Jim) Frederick (Lisa) Maureen Walton (William); loving pop - pop to Rosalie and Jordan. He especially adored his grandkids and they loved playing with him. He is survived by many nieces and nephews, friends from high school, co-workers, and countless acquaintances whom he influenced throughout his journeys. John is predeceased by his father, John Thomas Byrne, Jr and his grandson John Thomas Byrne, V. He is now holding his grandson and hanging with his dad.

Farewell Tribute
A viewing will be held to the public Monday, November 16th from 4pm-7pm at McGuinness Funeral Home at 573 Egg Harbor Road, Sewell, NJ, 08080. A Funeral Mass will be held open to the public on November 17th at 11am at Incarnation Church at 240 Main St, Mantua Township, NJ 08051. Interment New St. Mary's Cemetery Bellmawr, NJ

To send flowers to the family or plant a tree in memory of John Byrne III, please visit Tribute Store
Print
Monday
16
November