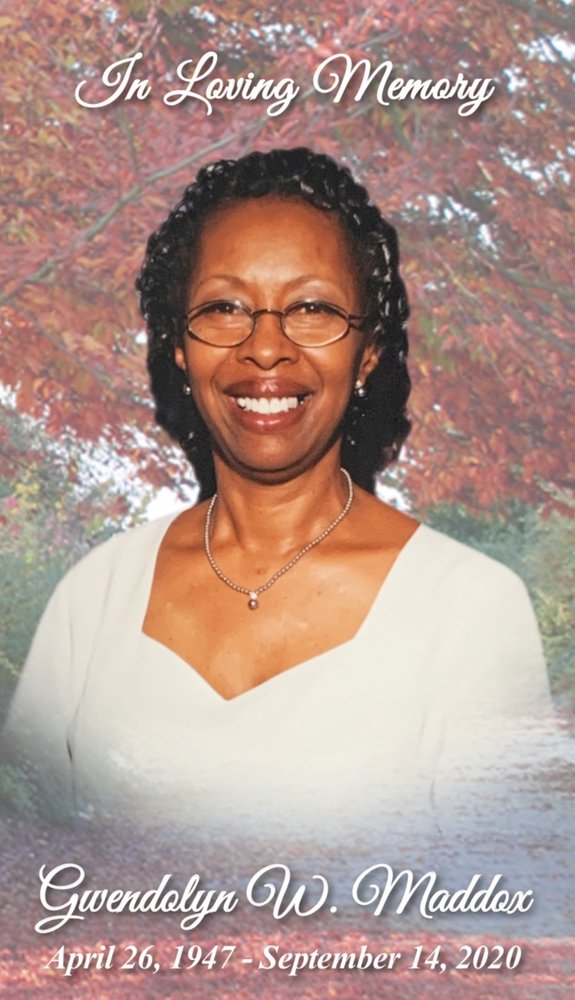 Legacy
Gwendolyn W. Maddox (nee Wimbrough) was born in Camden, New Jersey on April 26, 1947 to the late Elnora Clark. She was raised in Woodbury, New Jersey by her mother and stepfather, Harry Clark. Gwen, affectionately called Chee-Chee by some of her closest friends and family, was educated in the Woodbury school system and graduated from Woodbury High School in 1965. During these years, she played tennis and was one of the smartest people in her class. Her smile and walk were very distinctive. Her laughter and giggle were infectious. She was extra-caring and loved by everyone. After high school, she began her career at Prudential Insurance Company in 1965. At Prudential, she continued to be well-liked and formed many lasting friendships. In 1971, Gwen married Leonard Maddox. Their union was blessed by two daughters – Stephanie and Shellee. After both children became school aged, Gwen returned to work and began a successful career with the Housing Authority of Gloucester County. After serving in various roles at the Housing Authority, Gwen retired as a Human Resources Manager in 2007, having completed 27 years of dedicated service. Gwen’s life was centered on her faith in God, and she was baptized in 1986 at Bethlehem Baptist Church. At Bethlehem, she served as a long-time member and Chairperson of the Finance Committee. She was also a member of Women’s Fellowship and the Scholarship Committee. Education was important to her, and she always encouraged young people to further their learning with excellence. In 2018, she was installed as a Trustee at Bethlehem and was later appointed Vice Chairperson of the Trustee Board in 2019. Gwen remained active in that role until her passing.  For years, Gwen was an avid and loyal Philadelphia Eagles fan. No matter if they were winning or losing, she always supported and defended her team. She was finally able to see them win Super Bowl LII in 2018! When not watching Eagles games, Gwen enjoyed going to the movies, concerts and plays, dining at her favorite restaurants and talking on the phone with friends, most notably Diane and Karen. Traveling was also a major part of Gwen’s life, as she traveled both internationally and domestically. In recent years, she regularly took the opportunity to visit her younger daughter and family in Central Florida. Gwen was also fond of playing the card game Crazy Eights with her family during holidays and special occasions. One of her hobbies was collecting elephants, which could be found on display throughout her home. Gwen was a quiet and kind woman with a heart of gold. Many have commented she was the sweetest person they knew. Family was everything to her, and she meant the world to them! She was always there for friends and family in need and was just a quick phone call or short plane ride away. She was well-known for her punctuality and for promoting right versus wrong.  Gwen leaves to cherish beautiful memories her two loving daughters: Stephanie Maddox (Santiago) and Shellee De Freitas (Richard), three granddaughters: Alexis Maddox, Eliana De Freitas and Khaleria Harris, two great grandsons: Tycere and Syncere, brother Marvin Clark (Joan), sister-in-law Janice Maddox, brother-in-law Kevin Robinson, Godson Tyree Clark, two lifelong friends: Diane Hill and Karen Pierce, former husband Leonard Maddox and a host of nieces, nephews, cousins, friends and church family members.

Farewell Tribute
Relatives and friends are invited to attend her viewing on Thursday, September 24th, 2020 from 8:30AM to 11:00AM in the Bethlehem Baptist Church 414 Mantua Pike (Broad St.), Woodbury, NJ 08096. Funeral Service will be Private for the family.

To send flowers to the family or plant a tree in memory of Gwendolyn Maddox, please visit Tribute Store
Thursday
24
September

Share Your Memory of
Gwendolyn
Upload Your Memory View All Memories
Be the first to upload a memory!
Share A Memory
Send Flowers