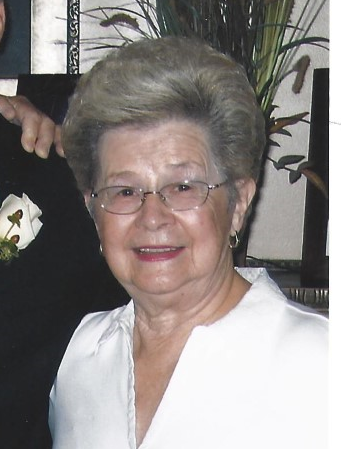 Mom was born and raised in Hanover Township, PA just outside of Wilkes-Barre. Her parents were immigrants from Czechoslovakia with her father coming to the US through Ellis Island around 1915. He secured work and was able to save enough money to bring his wife and first daughter, Mary, to the US. They were raised Russian Orthodox and were very devote. Mom also learned to speak Russian and was very fluent.

Mom met her husband Bernie as she graduated high school and they were married over 60 years. They moved to South Jersey because Dad got a job at DuPont and Mom became the consummate home maker. She prided herself on her ability to take care of a home and raise a family and thoroughly enjoy life.

Although raised Russian Orthodox, they found Christ Episcopal Church in Woodbury and became steadfast members. Christ Church became a second home and she was very involved in numerous groups and activities and made sure that her family also became involved. She was a member of the Trinity Guild, Altar Guild, and many others. Many of her longtime friends came from the relationships she developed at church.

She enjoyed her family, entertaining, traveling, and life. One of her true joys besides family was entertaining so she would plan and host dinner parties throughout the year inviting friends and neighbors. She would also have her entire family over almost every Sunday throughout the summer for pool parties with her grandchildren remembering it fondly.

She traveled extensively with friends and family. She planned many family vacations and even after her children were married she “convinced” Dad to take the entire family on vacation. We traveled to Disney World, took a Disney Cruise, Punta Cana, Ocean City, MD, and others. The pride and joy she felt was contagious.

Her legacy will be of a caring and loving wife, mother, grandmother, great grandmother and friend. Mom will certainly be missed by all who knew her but will forever be remembered.

To send flowers to the family or plant a tree in memory of Anna Lasoski, please visit Tribute Store

Share Your Memory of
Anna
Upload Your Memory View All Memories
Be the first to upload a memory!
Share A Memory
Send Flowers