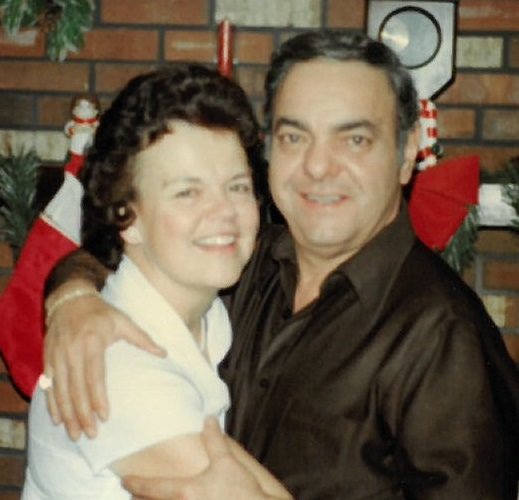 Theirs was a fairy tale story.  Their story began in Verga where they first met.  Dolores worked at a soda shop and when James saw her, he was enamored with her; thought she was stunning.  James asked for her telephone number and Dolores replied "that she was in the book."  That is how the story began.  They were married for 70 years and they made a handsome couple.  They raised a beautiful family and cherished their time with grandchildren.  They enjoyed traveling to New England to see the foliage and made wonderful memories with their extended family on their yearly trips to Brigantine.  Their loving home was to place to be in the neighborhood.  James was Mr. Fix it, always had a project in the works and Dolores being a wonderful homemaker with her baked goodies and involvement with their children's activities.  Family time was most important and that was displayed in the weekly Sunday night pasta dinners that all were expected to attend.

James was born in Philadelphia and Dolores was born in Bridgeton.  They lived in Bellmawr for 40 years and Washington Township for 20 years.  James was a proud United States Veteran of the Korean War serving from 1952-1953.  Prior to retiring in 1991, James was a salesman for Sears, Roebuck and Company in Camden, Moorestown and Deptford for 42 years.  James and Dolores devoted to their faith and longtime members of St. Luke's Episcopal Church in Westville.

Relatives and friends are invited to attend James and Dolores' visitation on Saturday, November 2, 2019, 9:00 - 10:00 AM at the McGuinness Funeral Home, 573 Egg Harbor Road, Sewell, NJ  08080, where the Memorial Ceremony will follow at 10:00 AM.  Graveside services and Military Honors will be held at Gloucester County Veteran Memorial Cemetery, Williamstown, NJ.

To send flowers to the family or plant a tree in memory of James J. and Dolores M. Baglivo, please visit Tribute Store
Saturday
2
November

Share Your Memory of
James J. and Dolores M.
Upload Your Memory View All Memories
Be the first to upload a memory!
Share A Memory
Send Flowers