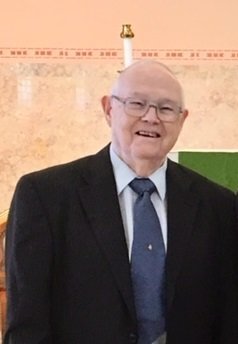 Robert was born in Camden, NJ to Robert Jr and Anna Brown.  At the age of 18, he enlisted in the United States Air Force for 4 years.  During his time in the service Robert was a Draftsman, stationed in St. Albans, Vermont. During that time he met the love of his life, Audrey Deso. After Vermont, he was sent to frigid Baffin Island where he spent 12 months in isolation duty as part of the "Frozen Chosen".  After Baffin Island, he married Audrey and was assigned to Wright Patterson Air Force Base in Dayton, Ohio. There he assisted in designing jet blast deflectors and seat ejectors.  After his discharge from the Air Force, Robert returned to New Jersey and was employed by RCA in Camden.  There he designed circuit boards that allowed the Ranger Camera to take the first pictures of the moon.  Robert eventually changed careers and went into the Insurance business where he worked at Prudential Insurance as a Sales Manager and retired in 1993.  Among all of Roberts accomplishments, he was also the Grand Knight for the Knights of Columbus, a Chaplain for the VA and a founding member of the Oak Valley Athletic Association.

Robert will be remembered as a true family guy, he loved his wife, his family and he loved God.  He enjoyed the trips to Vermont for family gatherings.  Among his love for his family, he was his grandchildrens #1 sports fan and was an avid fan of Philly sports as well.  Robert was happy to be able to see the Eagles win the Superbowl in 2018.  He liked to play golf and bowl, was a pinochle player and great ballroom dancer.  Robert also is known to have a beautiful voice.

Relatives and friends are invited to attend his viewing at 8:30AM-10:30AM in the McGuinness Funeral Home - Woodbury, 34 Hunter Street.  Funeral Service to follow at St. Patrick's Church, 86 Cooper St. in Woodbury at 11:30AM.  Interment with Military honors to take place at Gloucester County Veterans Memorial Cemetery, Williamstown.

Get Directions
Tuesday
7
May

Get Directions
Tuesday
7
May