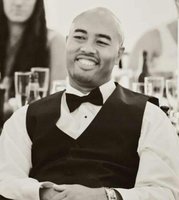 Scott Frazier, 43, of Washington Township, formerly of Atlanta, GA, passed away on Friday, September 20, 2019, surrounded by his loving family.

Legacy
An outgoing and funny guy, Scott lived life to the the fullest.  He was adored by many dear friends and was a true gentleman who people were drawn to.  Scott was devoted to his furry pal, Vick and often said that Vick "completed him."

Scott was born in Philadelphia and raised in Washington Township, New Jersey though he spent most of his adult years in Atlanta, Georgia. He attended Howard University and Clark Atlanta University where he played baseball while completing his bachelor's degree. His love of baseball was immense and went on to share his passion by coaching at Atlanta Tucker High School, Team 360 Hawks and South Jersey Cubs. While living in Atlanta, Scott was a Sales Supervisor for Comcast Cable and he was an avid fan of the Phillies and Eagles.

Farewell Tribute
Relatives and friends are invited to attend Scott's visitation on Wednesday, 6:30 - 9:00 PM and Thursday, 8:30 - 9:45 AM in the McGuinness Funeral Home, 573 Egg Harbor Road, Sewell, NJ. Mass of Christian Burial will be celebrated Thursday, 11 AM at Mary, Mother of Mercy at Our Lady of Lourdes Church, 500 Greentree Road, Glassboro, NJ 08028.  Interment will follow at Hillcrest Memorial Park, Washington Township, NJ.

In lieu of flowers memorial contributions may be made in Scott's memory to Team 360 Hawks, 1724 Veranda Chase Drive, Lawrenceville, GA  30044.