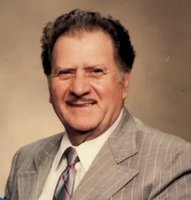 CAPELLI, ANTONINO JR (DENNY) - 92, of Westville passed away peacefully at home with his family by his side on February 13, 2019.

Legacy
Born in Philadelphia, Denny was the son of Antonino and Josephine Capelli, In his teens he was an undefeated amateur boxer, known for his one punch knockout. He was a World War II Army Veteran who proudly served his country. In 1946 he married Rose DelPrete. They started a family and moved to Westville, NJ in 1950 where he became a member of the Police Reserve. He worked for Dupont as an electrician and in the mid 1960's he opened an Atlantic gas station in Westville. It was here that he found his true calling for automotive repair. Music was another passion of his from playing the guitar, harmonica, the organ, or just singing a song. He loved to entertain you. Always a jokester, laughing with a smile on his face. He was our family's #1 “Scoochamend”.

Farewell Tribute
Relatives and friends are invited to attend his viewing on Friday, February 22nd from 9:00AM to 11:00AM in the McGuinness Funeral Home, 34 Hunter St., Woodbury, NJ. Funeral Service at 11:00AM.  Interment at Riverview Cemetery Penns Grove, NJ.